You are here : Home » Portfolio » Fostering a Learning Society 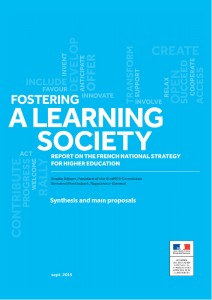 “What are the national objectives for French higher education within the next ten years and what must be done to reach them?…As American economist and 2001 Nobel Prize winner Joseph Stiglitz so aptly expressed, we must build “a learning society” able to evolve continuously and in which each individual has been taught to learn to progress as a professional and a citizen throughout his or her life. Higher education therefore must adapt. While previously it aimed to train a small elite, today it is open to most young adults. In some countries, it is expected the vast majority of the population will hold university degrees within ten years.”

The report serves up unapologetic analysis of the French higher education system’s strengths and weaknesses to take on the challenges to come and devises a roadmap of 40 realistic, concrete, and actionable proposals.

For it to have the desired impact, it needed to be distributed widely abraod. I had thus the pleasure of working once again with Sophie Béjean, President of the StraNES Committee, to produce the English version of the report’s synthesis.

Pleasure, yes, and it’s not meant as flattery! To have concepts and contexts that are often purely French be understood and well received abroad is not always simple. Our working styles share an attention to detail and care in choosing one word rather than another; we ask many questions and fight again abstract expression and platitude oh so easy to fall into in French; and we benefit from the mutual trust and ease at speaking frankly gained from past projects. Far from the image of the solitary translator who works in a vacuum, this collaboration is a partnership – a key to projects’ success.

“The pleasure is indeed mutual! Patricia not only delivers stellar work and meets deadlines, she collaborates closely with authors, questioning them and discussing issues with them so ensure their messages are carried and understood.”

The report and its English synthesis were presented to the President of the Republic on 8 September 2015.