Story telling | Once upon a time

For a factual summary of my educational and professional background, just follow the link.

I’d like to give you a richer sense of who I am and why intercultural communications are at the heart of my translation, copywriting and training business. I had a good head start and honed my expertise over the years — hands-on.

I do what I am

So I’ll tell you a story.

Once upon a time I was born in Vietnam. The sounds and scents of bustling Saigon are my earliest memories. Both my parents were French and became American. I was born a dual national and grew up as a compound bilingual. My early years were shared first between Saigon and Phnom Penh (Cambodia), and then followed by a stint in France, before settling in the US and splitting my time between New York and the family homestead across the Atlantic.

Talk about intercultural immersion!  At home, I was raised à la française. At the Lycée français de New York, I had a French education but with classmates from all over the world. All the while living in the Big Apple and influenced by American popular culture.

My first instance of culture shock came when I went off to university to study political science, first at Wellesley, then at New York University. The educational style was so different from the French, I had a lot to adapt to and learn.

Scent and sound are early memory triggers – and I felt how powerful they are when I moved to Hawai’i in 1989 for my PhD at the University of Hawai’i at Manoa as an East-West Center participant. I lived across from a small and fragrant plumeria grove, swayed to the rhythm of Southeast Asian languages and relearned Vietnamese, its six tones and diphthongs already familiar. I was able to return to Vietnam to live and work with permission from the US Treasury Department – the US hadn’t yet restored diplomatic relations and the trade embargo was still on.

In 1995, I moved to France, where I have lived since, working with mainly Western European and North American business cultures in French and English every day. 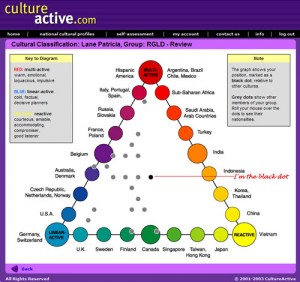 During an intercultural communications workshop I ran a few years ago, I joined participants in a CultureActive assessment. As the graph shows, the influence of my three cultures is obvious. I’m the black dot in the middle; my client’s team members are the grey ones.

If you’d like to know about different methods to discover your own cultural profile, learn how it influences your professional life and need to communicate within this triangle, get in touch.

Signatory to the SFT’s Professional Code of Conduct.