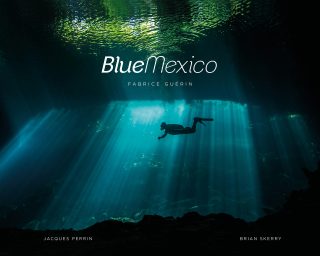 Fabrice Guérin is a talented animal photographer committed to the preservation of biodiversity whose severe deterioration cannot be ignored.

He’s chosen to raise public awareness through photography, launching myNature, a series of magnificent books whose first volume is Blue Mexico in which Fabrice shares some of his most striking encounters with marine and submarine species in Mexico—in itself, an ocean of life.

The texts that accompany his breathtaking photography are powerful, sensitive, sometimes lyrical, always on point and engaged.

It was a pleasure, albeit sometimes a difficult one, to rework and shape them so that they may carry their  message in English with equal conviction and heart. Fabrice gave me free rein and I thank him for his trust. When I had to take my sharp quill to slash a paragraph-long sentence whose anaphora aimed to shake up consciences, I held my breath waiting for its author’s, Jacques Perrin, reaction. What joy when he approved it!

Patricia’s reputation goes well beyond my expectations: rigor, sound advice, availability—all of which combine for an excellent piece of work. Thank you, Patricia!

Blue Mexico will be published in September 2019.